The Maths topics involved were history of Maths, equations, logic, calculations and numbers.

In a pre-activity stage we selected a movie that includes Maths. In our case, it was Fermat’s Room, as it contains many references to mathematicians and maths and logical problems. The film was watched with the group of Spanish students, extracting the mathematical information contained in it.

The students prepared presentations about the film and the mathematicians mentioned in it – Fermat, Olivia Sabuco, Pascal, Hilbert and Galois -, and created and selected mathematical and logical problems to compose a game similar to a web quest, with mind puzzles, problems and riddles  to create their own Fermat’s Room Game. It was implemented using HTML language.

Once gathered with the students of the rest of the contries, the film The Fermat’s Room was presented by Spanish students. They also carried out a presentation about the mathematicians mentioned in the film, which can be found here: FERMAT'S ROOM & MATHEMATICIANS 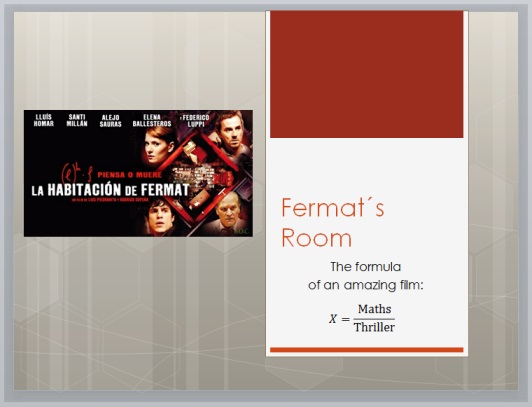 All the participants watched a summarized version of the film. After that, they were distributed in mixed groups by nationalities, each one with a Spanish student, as coordinator of the group. Each group had a tablet PC containing the game that had been done in the pre-activity stage installed, plus paper and pencil to do calculations.

The Spanish students presented the game and explained its rules.

The game started and all the groups tried to solve the challenges contained in it.

When the time given by the game finished, only one team succeeded in exiting from the Fermat’s Room proposed. They received a little prize.

Finally, the Spanish students explained the solution to the puzzles of the game.

After that, all partners watched a summarized versión of the Spanish film The Fermat’s Room.

The game can be found here. It is a .rar file which must be unfolded with any suitable software – for instance, WinRar -. Then, you have to double click on the file index.html to start the game: GAME. 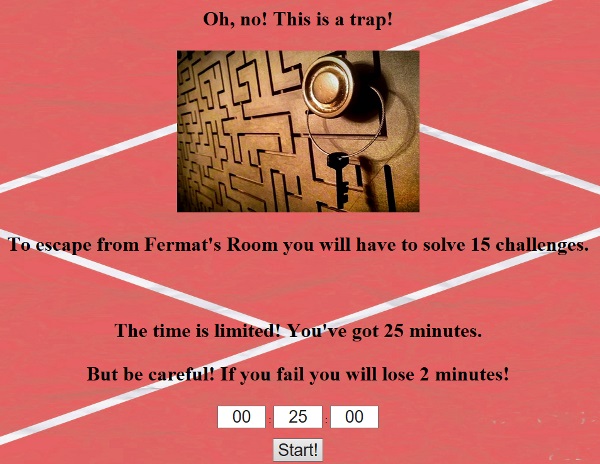 Click   here   to download the game that we have done for the meeting. Once you have download it, please unfold it and double click on INDEX file that you will find inside the folder.