In our meeting in Greece, this activity focused on Spanish Cinema. Before the meeting, Spanish students prepared a presentation on Spanish Cinema, and selected three representative films  of it, which were Bienvenido Mr Marshall, La Niña de tus Ojos and La Gran Familia Española.

No mathematical pre-requisite is needed, as this activity is fundamentally based on the history of cinema in a specific country – in our case, Spain, but Maths concepts are included in the activity, such as the golden proportion or the rule of thirds.

The objectives planned for this activity included studying and analysing the history of cinema in Europe, promoting the European culture and feeling of cohesion among our students, and encouriging cooperation and creativity through the recording of free versions of European films.

In a pre-activity stage done in Spain, Spanish students studied the history of Spanish cinema and prepared a presentation of these topics, trying it to be as much dynamic as possible. They selected three scenes of Spanish Cinema, to be recorded during the activity in international groups of students. They planned how to organize the recording of the videos, including the decoration and costumes needed, and organized the three groups to record the scenes, mixing students from the other three participant countries.

In the meeting, Spanish students carried out their presentation about Spain and Spanish cinema. During those presentations, the three selected scenes of Spanish Cinema were watched, and students from the other countries were divided into the planned groups, in order to shoot those scenes.

During one hour, students planned how to shoot their scene, using decoration and costumes, and practising the scene itself. They tried to use concepts like the golden proportion and rule of thirds.

After that, they represented their scenes on the stage on an assembly hall, being recorded.

Here is the short interactive presentation about SPAIN with wich they started: 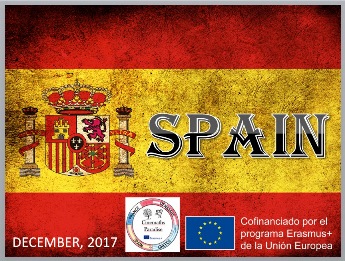 After that they carried out the main presentation, about the SPANISH CINEMA. 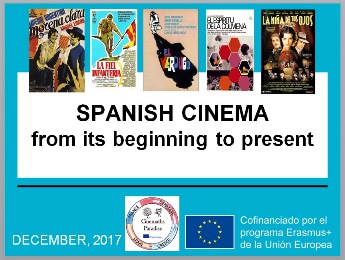 After the presentation, multinational teams of students from Denmark, France and Greece represented those scenes. Spanish students took part in the activity too, but trying to make their foreign colleagues have the leading roles and not to appear in the foreground.

The results were very satisfying, as Danish, French and Greek students got warmly involved in the process of practising and shooting the scenes: